When you book with an account, you will be able to track your payment status, track the confirmation and you can also rate the tour after you finished the tour.
Sign Up
5924

This is the BIG one. Five Stans in four weeks.

More than 2,000 years ago, the great trade routes that linked Europe and China opened Central Asia to foreign cultures, customs and religions. Join a modern-day caravan on an epic journey to five exotic countries.

Bukhara: Whispers of the Silk Road
Khiva: Lighthouse in the Desert

– All airfares & taxes (Flying Emirates)
– Visa for Azerbaijan
– Hotel day room in Dubai on the way to Central Asia
– Accommodation in 3-star, 4-star & 5-star hotels (plus New Tourist Bungalows at Iskanderkul and Sugd Hotel in Penjikent)
– 27 breakfasts, 21 lunches & 17 dinners
– Bottled water with meals and on the coach
– Visas for Tajikistan and Turkmenistan
– Touring by private coach
– Train from Bukhara to Khiva
– Group tipping
– Services of a Tour Manager for all five countries and local guides
– Assistance of your Tour Leader, Mandy Page

We start out Central Asia adventure with a flight to Dubai with Emirates.

A day to enjoy in Dubai before flying on to Bishkek, (hotel rooms available until we leave).

We start the day with easing into the local time zone. A gentle walk about with your Tour Leader will help adjust to being in Kyrgyzstan. In the early afternoon we will visit the Osh Bazaar. The sights, smells and sounds of bazaars are part of the sensory experience of Bishkek.

Today we have a city tour of Bishkek and travel out of the city to visit Archa National Park. We finish the day with a fabulous meal which includes a performance of local music.

After breakfast, set out overland to Lake Issyk Kul. En route, stop in Tomok town to take in Burana Tower, a remnant of the old silk road. Later we will witness the young Kyrgyz men practicing some of their horse games including Ulak Tartysh, a sort of polo. The day will then be completed with a local demonstration of felt making.

In this beautiful area we will take in the petroglyphs created by tribes of the Neolithic period and imagine life before written words. Moving in to Grigorievka Gorge, we will walk up the valley to enjoy some fresh air and fantastic scenery. Along the way we see an eagle hunting demonstration and have an opportunity to hold these amazing birds.

Today we travel to the border and enter into Kazakhstan. The journey will be a great opportunity to see the local geography and understand how these countries developed.

We start the day with a visit to the Central State Museum,a building which houses the Golden Man, a warrior’s armour made from 4,000 gold pieces. There are also displays of Kazakh handicrafts, jewellery and clothing. Then its on to meet a fascinating local who looks after falcons, owls and vultures and he will introduce us to these clever birds and their skills.
After lunch at a local restaurant it will be time to take a walk in Panfilov Park where we can learn about Soviet involvement with this region and of course visit the colourful Zenkov Cathedral. To keep our energy levels up we will finish the day with a visit to a local chocolate factory.

This morning we drive out of Almaty to spectacular Charyn Canyon, or “Valley of Castles.” We can walk down this beautiful canyon to the river enjoying its strange but colourful rock formations. Lunch will be near the river before we return to Almaty.

Today we say goodbye to Kazakhstan and hello to Uzbekistan. After our short flight to Tashkent we will enjoy a visit to a local ceramics studio. In true Uzbek hospitality, enjoy fragrant tea and sweets while conversing with Alisher Rakhimov about his art and passion for preserving and passing on his family’s prized ceramics legacy.
When we arrive at the hotel, enjoy a short walking orientation of the local area.

Today we have a city tour which covers some of the highlights of Tashkent: The Courage Monument dedicated to those who suffered in the 1966 earthquake, Independence Square, and your first glimpse of the Muslim influence in Central Asia.

Before we start out journey to Tajikistan, we take in the impressive Railway Museum (outside) and the wonderful Applied Arts Museum (inside). The former is to place the importance of transport into the Silk Road connection and the latter to appreciate the beauty of the tradition and customs of this region.

Central Asia has a vast history and foremost amongst its influences are the Sogdianas, so we start the day with a visit to the Historical Museum of Sogdiana, a small but fascinating museum, complete with a mural of Alexander the Great’s life.
Then its on to the Muslihiddin Memorial Complex, which includes a 16th-century mosque and 19th-century minaret. We round out the day with a visit to the pink painted covered Panjshanbe Bazaar, filled with fresh fruit, bread, flowers and goods to buy. The Bazaar is next to a Friday Mosque and today being Friday, we hope to observe the men at prayer.

We set out overland towards Iskanderkul this morning. This trip into the mountains has a mixture of local villages, stunning scenery and remnants of centuries of travellers. Iskanderkul is a turquoise lake high in the hills and is unique for its beauty and location.

This morning join an optional walk to the nearby waterfall before we set off to Dushanbe.
On arrival this afternoon we visit the new National Museum of Tajikistan and Flagpole Park, home to the world’s tallest flagpole. Completed in 2011, the flagpole stands at 541 feet (165 metres).

Hissar Fortress is just outside the city and well-worth a visit so we will take in its walls, mosque, madrassah and ruins.
Time for a walk as we take in Ismail Samani monuments and the nearby Rudaki Park. Afterwards we have a special visit to the Gurminj Museum of Musical Instruments to listen to some Sufi music and appreciate the variety of stringed instruments from across Central Asia.

Today we head out overland to Penjikent to get us back near the Uzbek border. However, Penjikent is a lovely place, full of local colour and a place few Westerners get to. There is an opportunity to enjoy a walk to the lively bazaar and maybe pick up a bargain or three.

This morning we cross back into Uzbekistan and onto Samarkand, the stuff of poetry and legends. A visit to Samarkand has to include the extraordinary ensemble of buildings known as Registan Square. This collection of buildings includes tall facades, domes, beautiful tile work and a special atmosphere.
Then it’s on to Gur-Emir Mausoleum, the final resting place of Tamerlane. The interior of the mausoleum has been restored and is brilliant in gold leaf and fresh tile.
For a change in pace, we then visit internationally recognized fashion designer Valentina Romanenko’s studio. We enjoy a short presentation with graceful Uzbek women modeling Romanenko’s sophisticated creations as exotic music plays.
Dinner this evening is at the home of the local Dilfuza family.

There are still wonders left to visit in Samarkand and chief amongst them is the Bibi Khanum Mosque, built by Tamerlane to be the largest mosque in the Islamic world. Also, on the list is the row of tombs and mausoleums collectively called Shah-i-Zinda, or “place of a living king”. Even on hot days the mausoleums remain shady and cool and are full of surprising visual delights. Then its on to the Ulug Bek Observatory where we can appreciate how clever and determined Tamerlane’s grandson was to understand the stars.
Lastly we visit the Afghan-Uzbek Silk Carpet Factory and learn how to make our own carpets.

We wet out this morning overland towards Bukhara with an en route stop in Gijduvan. Here we will visit the ceramics workshop of the Narzulaev family. We get to tour the kilns and the studio, and enjoy a meal in the showroom, where glowing handmade ceramic plates and bowls are on display.

An oasis in the desert, UNESCO-listed Bukhara offers cool shade and rest to the modern traveller as it did to the camel caravans that plied the Silk Road hundreds of years ago. Bukhara is as old as Samarkand, and has preserved its ancient architecture and design; just wandering the streets is a delight. Our visit in Bukhara starts with a walking orientation of the old city.

Just outside the city is Bakhaudin Naqshband Mausoleum We will visit the final resting place of this 14th century Sufi mystic to appreciate the beauty of the buildings but also to observe pilgrims visiting the site. Nearby is the Palace of Moon and Stars, or the Summer Palace of the last Emir of Bukhara. The palace was built for the Emir at the turn of the century, after the Russians took control of Bukhara. It was designed to keep the emir in luxury, but removed from the city, isolated and politically impotent.
After lunch, enjoy the afternoon and evening exploring old Bukhara and its many shopping and photography opportunities.

Today we head towards the desert fortress town of Khiva by train. The journey is a fascinating glimpse into rural Uzbekistan and gives us an appreciation of the harshness of the desert.

We have a half day walking tour around Old Town Khiva. Archaeologists have found traces of human habitation around Khiva dating from the 5th century BC. It was for hundreds of years a stop on the old Silk Road and is a living museum. There is so much to enjoy in Khiva we have allowed time for you to explore on your own or with your tour leader.

This morning we head to the border and cross over into Turkmenistan. after lunch we fly to Ashgabat a strange and unusual city.

Just outside Ashgabat is Nisa, a place which was once a major centre of the ancient Parthian Kingdom. Though Nisa was ruled by a succession of dynasties, it remained an important centre in the ancient world until the 13th century, when the Mongols sacked it.
Then it’s on to the huge $100-million-dollar Kipchak Mosque, big enough to hold 10,000 people and covered in more gold and marble then you can imagine.

Whilst we are outside the city, we will visit a horse-breeding farm devoted to the renowned Akhal-Teke horse, arguably the oldest cultured breed of horse in the world.

We start the day with a dip into the National Museum of Turkmenistan, with its grand approach and panoramic views. The museum introduces modern Turkmenistan on the ground floor and ancient history in the galleries above.
We have lunch at a local restaurant with a performance of Turkmen music.
This evening we have a Farewell Dinner at our hotel.

Home with special memories of our time in Central Asia 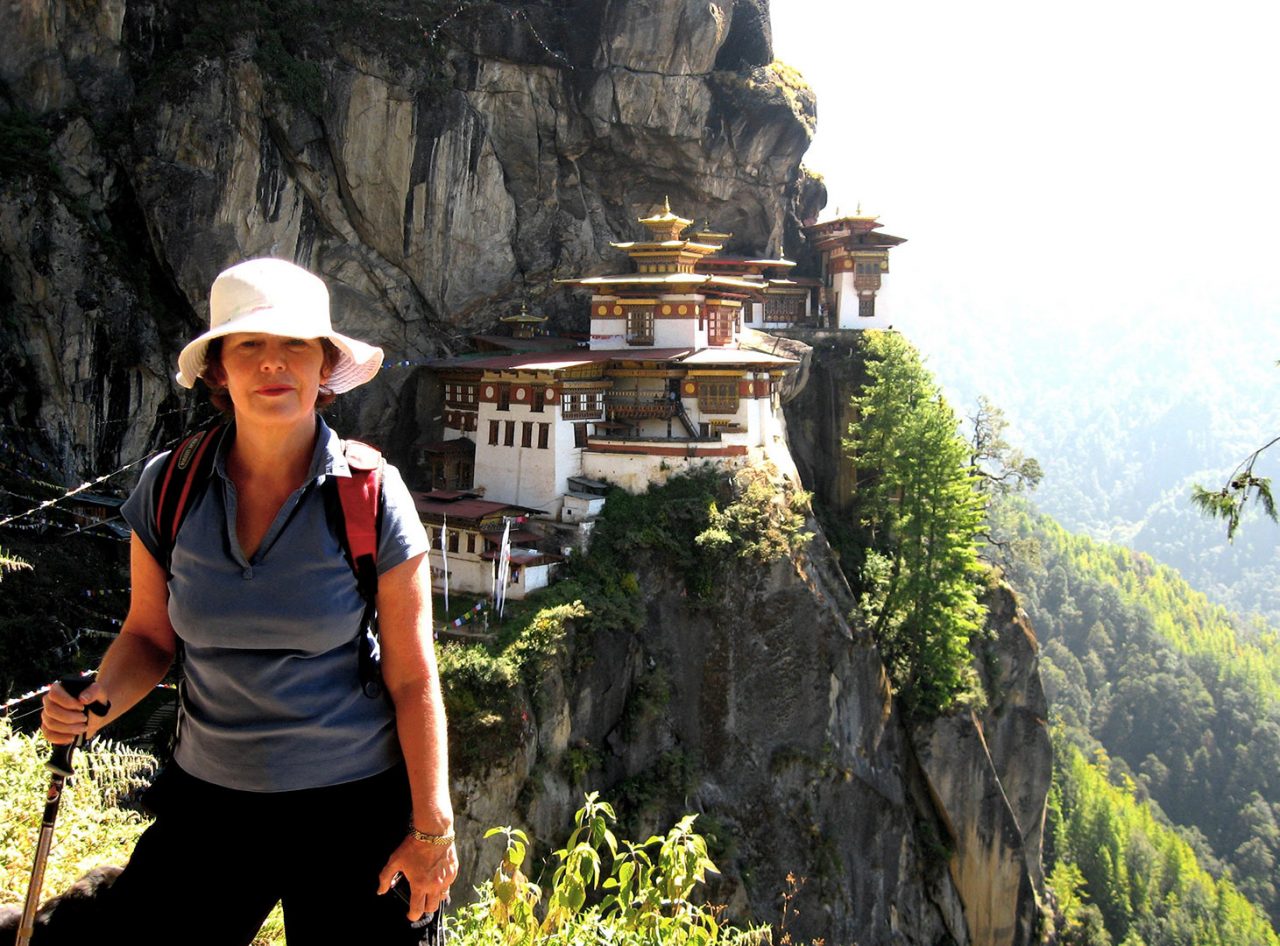 Mandy is one well-travelled person, having visited all 7 continents!

She is interested in the arts and has an unquenchable fascination with ancient history and cultures. You’ll benefit from Mandy’s extensive travel experience, and especially enjoy her infectious laughter.